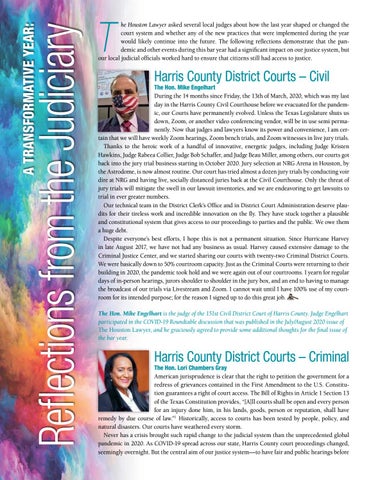 Reflections from the Judiciary

he Houston Lawyer asked several local judges about how the last year shaped or changed the court system and whether any of the new practices that were implemented during the year would likely continue into the future. The following reflections demonstrate that the pandemic and other events during this bar year had a significant impact on our justice system, but our local judicial officials worked hard to ensure that citizens still had access to justice.

The Hon. Mike Engelhart During the 14 months since Friday, the 13th of March, 2020, which was my last day in the Harris County Civil Courthouse before we evacuated for the pandemic, our Courts have permanently evolved. Unless the Texas Legislature shuts us down, Zoom, or another video conferencing vendor, will be in use semi permanently. Now that judges and lawyers know its power and convenience, I am certain that we will have weekly Zoom hearings, Zoom bench trials, and Zoom witnesses in live jury trials. Thanks to the heroic work of a handful of innovative, energetic judges, including Judge Kristen Hawkins, Judge Rabeea Collier, Judge Bob Schaffer, and Judge Beau Miller, among others, our courts got back into the jury trial business starting in October 2020. Jury selection at NRG Arena in Houston, by the Astrodome, is now almost routine. Our court has tried almost a dozen jury trials by conducting voir dire at NRG and having live, socially distanced juries back at the Civil Courthouse. Only the threat of jury trials will mitigate the swell in our lawsuit inventories, and we are endeavoring to get lawsuits to trial in ever greater numbers. Our technical team in the District Clerk’s Office and in District Court Administration deserve plaudits for their tireless work and incredible innovation on the fly. They have stuck together a plausible and constitutional system that gives access to our proceedings to parties and the public. We owe them a huge debt. Despite everyone’s best efforts, I hope this is not a permanent situation. Since Hurricane Harvey in late August 2017, we have not had any business as usual. Harvey caused extensive damage to the Criminal Justice Center, and we started sharing our courts with twenty-two Criminal District Courts. We were basically down to 50% courtroom capacity. Just as the Criminal Courts were returning to their building in 2020, the pandemic took hold and we were again out of our courtrooms. I yearn for regular days of in-person hearings, jurors shoulder to shoulder in the jury box, and an end to having to manage the broadcast of our trials via Livestream and Zoom. I cannot wait until I have 100% use of my courtroom for its intended purpose; for the reason I signed up to do this great job. The Hon. Mike Engelhart is the judge of the 151st Civil District Court of Harris County. Judge Engelhart participated in the COVID-19 Roundtable discussion that was published in the July/August 2020 issue of The Houston Lawyer, and he graciously agreed to provide some additional thoughts for the final issue of the bar year.

The Hon. Lori Chambers Gray American jurisprudence is clear that the right to petition the government for a redress of grievances contained in the First Amendment to the U.S. Constitution guarantees a right of court access. The Bill of Rights in Article 1 Section 13 of the Texas Constitution provides, “[A]ll courts shall be open and every person for an injury done him, in his lands, goods, person or reputation, shall have remedy by due course of law.”1 Historically, access to courts has been tested by people, policy, and natural disasters. Our courts have weathered every storm. Never has a crisis brought such rapid change to the judicial system than the unprecedented global pandemic in 2020. As COVID-19 spread across our state, Harris County court proceedings changed, seemingly overnight. But the central aim of our justice system—to have fair and public hearings before