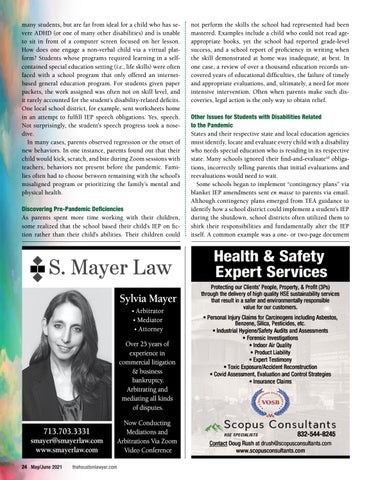 many students, but are far from ideal for a child who has severe ADHD (or one of many other disabilities) and is unable to sit in front of a computer screen focused on her lesson. How does one engage a non-verbal child via a virtual platform? Students whose programs required learning in a selfcontained special education setting (i.e., life skills) were often faced with a school program that only offered an internetbased general education program. For students given paper packets, the work assigned was often not on skill level, and it rarely accounted for the student’s disability-related deficits. One local school district, for example, sent worksheets home in an attempt to fulfill IEP speech obligations. Yes, speech. Not surprisingly, the student’s speech progress took a nosedive. In many cases, parents observed regression or the onset of new behaviors. In one instance, parents found out that their child would kick, scratch, and bite during Zoom sessions with teachers, behaviors not present before the pandemic. Families often had to choose between remaining with the school’s misaligned program or prioritizing the family’s mental and physical health. Discovering Pre-Pandemic Deficiencies As parents spent more time working with their children, some realized that the school based their child’s IEP on fiction rather than their child’s abilities. Their children could

not perform the skills the school had represented had been mastered. Examples include a child who could not read ageappropriate books, yet the school had reported grade-level success, and a school report of proficiency in writing when the skill demonstrated at home was inadequate, at best. In one case, a review of over a thousand education records uncovered years of educational difficulties, the failure of timely and appropriate evaluations, and, ultimately, a need for more intensive intervention. Often when parents make such discoveries, legal action is the only way to obtain relief. Other Issues for Students with Disabilities Related to the Pandemic States and their respective state and local education agencies must identify, locate and evaluate every child with a disability who needs special education who is residing in its respective state. Many schools ignored their find-and-evaluate10 obligations, incorrectly telling parents that initial evaluations and reevaluations would need to wait. Some schools began to implement “contingency plans” via blanket IEP amendments sent en masse to parents via email. Although contingency plans emerged from TEA guidance to identify how a school district could implement a student’s IEP during the shutdown, school districts often utilized them to shirk their responsibilities and fundamentally alter the IEP itself. A common example was a one- or two-page document