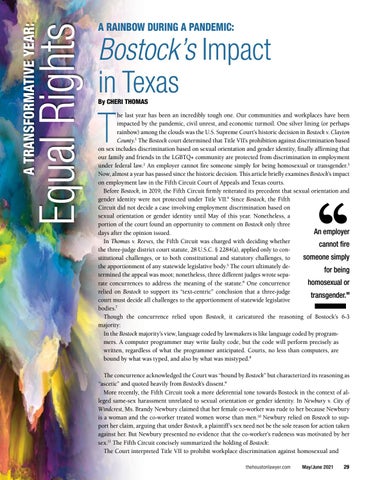 A Rainbow During a Pandemic:

he last year has been an incredibly tough one. Our communities and workplaces have been impacted by the pandemic, civil unrest, and economic turmoil. One silver lining (or perhaps rainbow) among the clouds was the U.S. Supreme Court’s historic decision in Bostock v. Clayton County.1 The Bostock court determined that Title VII’s prohibition against discrimination based on sex includes discrimination based on sexual orientation and gender identity, finally affirming that our family and friends in the LGBTQ+ community are protected from discrimination in employment under federal law.2 An employer cannot fire someone simply for being homosexual or transgender.3 Now, almost a year has passed since the historic decision. This article briefly examines Bostock’s impact on employment law in the Fifth Circuit Court of Appeals and Texas courts. Before Bostock, in 2019, the Fifth Circuit firmly reiterated its precedent that sexual orientation and gender identity were not protected under Title VII.4 Since Bostock, the Fifth Circuit did not decide a case involving employment discrimination based on sexual orientation or gender identity until May of this year. Nonetheless, a portion of the court found an opportunity to comment on Bostock only three An employer days after the opinion issued. In Thomas v. Reeves, the Fifth Circuit was charged with deciding whether cannot fire the three-judge district court statute, 28 U.S.C. § 2284(a), applied only to consomeone simply stitutional challenges, or to both constitutional and statutory challenges, to the apportionment of any statewide legislative body.5 The court ultimately defor being termined the appeal was moot; nonetheless, three different judges wrote sepahomosexual or rate concurrences to address the meaning of the statute.6 One concurrence relied on Bostock to support its “text-centric” conclusion that a three-judge transgender.” court must decide all challenges to the apportionment of statewide legislative bodies.7 Though the concurrence relied upon Bostock, it caricatured the reasoning of Bostock’s 6-3 majority: In the Bostock majority’s view, language coded by lawmakers is like language coded by programmers. A computer programmer may write faulty code, but the code will perform precisely as written, regardless of what the programmer anticipated. Courts, no less than computers, are bound by what was typed, and also by what was mistyped.8

The concurrence acknowledged the Court was “bound by Bostock” but characterized its reasoning as “ascetic” and quoted heavily from Bostock’s dissent.9 More recently, the Fifth Circuit took a more deferential tone towards Bostock in the context of alleged same-sex harassment unrelated to sexual orientation or gender identity. In Newbury v. City of Windcrest, Ms. Brandy Newbury claimed that her female co-worker was rude to her because Newbury is a woman and the co-worker treated women worse than men.10 Newbury relied on Bostock to support her claim, arguing that under Bostock, a plaintiff’s sex need not be the sole reason for action taken against her. But Newbury presented no evidence that the co-worker’s rudeness was motivated by her sex.11 The Fifth Circuit concisely summarized the holding of Bostock: The Court interpreted Title VII to prohibit workplace discrimination against homosexual and thehoustonlawyer.com