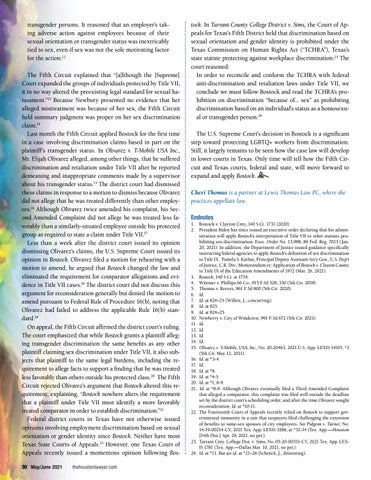 transgender persons. It reasoned that an employer’s taking adverse action against employees because of their sexual orientation or transgender status was inextricably tied to sex, even if sex was not the sole motivating factor for the action.12 The Fifth Circuit explained that “[a]lthough the [Supreme] Court expanded the groups of individuals protected by Title VII, it in no way altered the preexisting legal standard for sexual harassment.”13 Because Newbury presented no evidence that her alleged mistreatment was because of her sex, the Fifth Circuit held summary judgment was proper on her sex discrimination claim.14 Last month the Fifth Circuit applied Bostock for the first time in a case involving discrimination claims based in part on the plaintiff’s transgender status. In Olivarez v. T-Mobile USA Inc., Mr. Elijah Olivarez alleged, among other things, that he suffered discrimination and retaliation under Title VII after he reported demeaning and inappropriate comments made by a supervisor about his transgender status.15 The district court had dismissed these claims in response to a motion to dismiss because Olivarez did not allege that he was treated differently than other employees.16 Although Olivarez twice amended his complaint, his Second Amended Complaint did not allege he was treated less favorably than a similarly-situated employee outside his protected group as required to state a claim under Title VII.17 Less than a week after the district court issued its opinion dismissing Olivarez’s claims, the U.S. Supreme Court issued its opinion in Bostock. Olivarez filed a motion for rehearing with a motion to amend; he argued that Bostock changed the law and eliminated the requirement for comparator allegations and evidence in Title VII cases.18 The district court did not discuss this argument for reconsideration generally but denied the motion to amend pursuant to Federal Rule of Procedure 16(b), noting that Olivarez had failed to address the applicable Rule 16(b) standard.19 On appeal, the Fifth Circuit affirmed the district court’s ruling. The court emphasized that while Bostock grants a plaintiff alleging transgender discrimination the same benefits as any other plaintiff claiming sex discrimination under Title VII, it also subjects that plaintiff to the same legal burdens, including the requirement to allege facts to support a finding that he was treated less favorably than others outside his protected class.20 The Fifth Circuit rejected Olivarez’s argument that Bostock altered this requirement, explaining, “Bostock nowhere alters the requirement that a plaintiff under Title VII must identify a more favorably treated comparator in order to establish discrimination.”21 Federal district courts in Texas have not otherwise issued opinions involving employment discrimination based on sexual orientation or gender identity since Bostock. Neither have most Texas State Courts of Appeals.22 However, one Texas Court of Appeals recently issued a momentous opinion following Bos30 May/June 2021

tock. In Tarrant County College District v. Sims, the Court of Appeals for Texas’s Fifth District held that discrimination based on sexual orientation and gender identity is prohibited under the Texas Commission on Human Rights Act (“TCHRA”), Texas’s state statute protecting against workplace discrimination.23 The court reasoned: In order to reconcile and conform the TCHRA with federal anti-discrimination and retaliation laws under Title VII, we conclude we must follow Bostock and read the TCHRA’s prohibition on discrimination “because of... sex” as prohibiting discrimination based on an individual’s status as a homosexual or transgender person.24 The U.S. Supreme Court’s decision in Bostock is a significant step toward protecting LGBTQ+ workers from discrimination. Still, it largely remains to be seen how the case law will develop in lower courts in Texas. Only time will tell how the Fifth Circuit and Texas courts, federal and state, will move forward to expand and apply Bostock. Cheri Thomas is a partner at Lewis Thomas Law PC, where she practices appellate law.