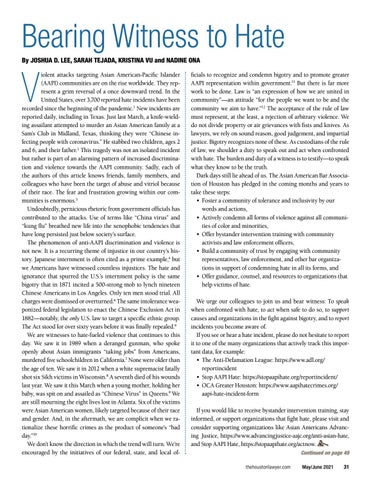 By Joshua D. Lee, Sarah Tejada, Kristina Vu and Nadine Ona iolent attacks targeting Asian American-Pacific Islander (AAPI) communities are on the rise worldwide. They represent a grim reversal of a once downward trend. In the United States, over 3,700 reported hate incidents have been recorded since the beginning of the pandemic.1 New incidents are reported daily, including in Texas. Just last March, a knife-wielding assailant attempted to murder an Asian American family at a Sam’s Club in Midland, Texas, thinking they were “Chinese infecting people with coronavirus.” He stabbed two children, ages 2 and 6, and their father.2 This tragedy was not an isolated incident but rather is part of an alarming pattern of increased discrimination and violence towards the AAPI community. Sadly, each of the authors of this article knows friends, family members, and colleagues who have been the target of abuse and vitriol because of their race. The fear and frustration growing within our communities is enormous.3 Undoubtedly, pernicious rhetoric from government officials has contributed to the attacks. Use of terms like “China virus” and “kung flu” breathed new life into the xenophobic tendencies that have long persisted just below society’s surface. The phenomenon of anti-AAPI discrimination and violence is not new. It is a recurring theme of injustice in our country’s history. Japanese internment is often cited as a prime example,4 but we Americans have witnessed countless injustices. The hate and ignorance that spurred the U.S.’s internment policy is the same bigotry that in 1871 incited a 500-strong mob to lynch nineteen Chinese Americans in Los Angeles. Only ten men stood trial. All charges were dismissed or overturned.6 The same intolerance weaponized federal legislation to enact the Chinese Exclusion Act in 1882—notably, the only U.S. law to target a specific ethnic group. The Act stood for over sixty years before it was finally repealed.6 We are witnesses to hate-fueled violence that continues to this day. We saw it in 1989 when a deranged gunman, who spoke openly about Asian immigrants “taking jobs” from Americans, murdered five schoolchildren in California.7 None were older than the age of ten. We saw it in 2012 when a white supremacist fatally shot six Sikh victims in Wisconsin.8 A seventh died of his wounds last year. We saw it this March when a young mother, holding her baby, was spit on and assailed as “Chinese Virus” in Queens.9 We are still mourning the eight lives lost in Atlanta. Six of the victims were Asian American women, likely targeted because of their race and gender. And, in the aftermath, we are complicit when we rationalize these horrific crimes as the product of someone’s “bad day.”10 We don’t know the direction in which the trend will turn. We’re encouraged by the initiatives of our federal, state, and local of-

ficials to recognize and condemn bigotry and to promote greater AAPI representation within government.11 But there is far more work to be done. Law is “an expression of how we are united in community”—an attitude “for the people we want to be and the community we aim to have.”12 The acceptance of the rule of law must represent, at the least, a rejection of arbitrary violence. We do not divide property or air grievances with fists and knives. As lawyers, we rely on sound reason, good judgement, and impartial justice. Bigotry recognizes none of these. As custodians of the rule of law, we shoulder a duty to speak out and act when confronted with hate. The burden and duty of a witness is to testify—to speak what they know to be the truth. Dark days still lie ahead of us. The Asian American Bar Association of Houston has pledged in the coming months and years to take these steps: • Foster a community of tolerance and inclusivity by our words and actions, • Actively condemn all forms of violence against all communities of color and minorities, • Offer bystander intervention training with community activists and law enforcement officers, • Build a community of trust by engaging with community representatives, law enforcement, and other bar organizations in support of condemning hate in all its forms, and • Offer guidance, counsel, and resources to organizations that help victims of hate. We urge our colleagues to join us and bear witness: To speak when confronted with hate, to act when safe to do so, to support causes and organizations in the fight against bigotry, and to report incidents you become aware of. If you see or hear a hate incident, please do not hesitate to report it to one of the many organizations that actively track this important data, for example: • The Anti-Defamation League: https://www.adl.org/ reportincident • Stop AAPI Hate: https://stopaapihate.org/reportincident/ • OCA Greater Houston: https://www.aapihatecrimes.org/ aapi-hate-incident-form If you would like to receive bystander intervention training, stay informed, or support organizations that fight hate, please visit and consider supporting organizations like Asian Americans Advancing Justice, https://www.advancingjustice-aajc.org/anti-asian-hate, and Stop AAPI Hate, https://stopaapihate.org/actnow. Continued on page 49 thehoustonlawyer.com