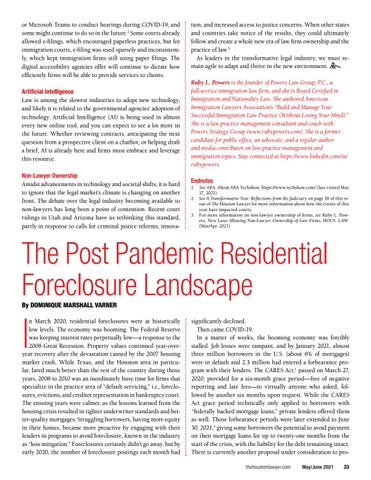 or Microsoft Teams to conduct hearings during COVID-19, and some might continue to do so in the future.2 Some courts already allowed e-filings, which encouraged paperless practices, but for immigration courts, e-filing was used sparsely and inconsistently, which kept immigration firms still using paper filings. The digital accessibility agencies offer will continue to dictate how efficiently firms will be able to provide services to clients. Artificial Intelligence Law is among the slowest industries to adopt new technology, and likely it is related to the governmental agencies’ adoption of technology. Artificial Intelligence (AI) is being used in almost every new online tool, and you can expect to see a lot more in the future. Whether reviewing contracts, anticipating the next question from a prospective client on a chatbot, or helping draft a brief, AI is already here and firms must embrace and leverage this resource. Non-Lawyer Ownership Amidst advancements in technology and societal shifts, it is hard to ignore that the legal market’s climate is changing on another front. The debate over the legal industry becoming available to non-lawyers has long been a point of contention. Recent court rulings in Utah and Arizona have us rethinking this standard, partly in response to calls for criminal justice reforms, innova-

tion, and increased access to justice concerns. When other states and countries take notice of the results, they could ultimately follow and create a whole new era of law firm ownership and the practice of law.3 As leaders in the transformative legal industry, we must remain agile to adapt and thrive in the new environment. Ruby L. Powers is the founder of Powers Law Group, P.C., a full-service immigration law firm, and she is Board Certified in Immigration and Nationality Law. She authored American Immigration Lawyers Association’s “Build and Manage Your Successful Immigration Law Practice (Without Losing Your Mind).” She is a law practice management consultant and coach with Powers Strategy Group (www.rubypowers.com). She is a former candidate for public office, an advocate, and a regular author and media contributor on law practice management and immigration topics. Stay connected at https://www.linkedin.com/in/ rubypowers.

1. See ABA, About ABA Techshow, https://www.techshow.com/ (last visited May 17, 2021). 2. See A Transformative Year: Reflections from the Judiciary on page 18 of this issue of The Houston Lawyer for more information about how the events of this year have impacted courts. 3. For more information on non-lawyer ownership of firms, see Ruby L. Powers, New Laws Allowing Non-Lawyer Ownership of Law Firms, HOUS. LAW. (Mar/Apr. 2021).

n March 2020, residential foreclosures were at historically low levels. The economy was booming. The Federal Reserve was keeping interest rates perpetually low—a response to the 2008 Great Recession. Property values continued year-overyear recovery after the devastation caused by the 2007 housing market crash. While Texas, and the Houston area in particular, fared much better than the rest of the country during those years, 2008 to 2010 was an inordinately busy time for firms that specialize in the practice area of “default servicing,” i.e., foreclosures, evictions, and creditor representation in bankruptcy court. The ensuing years were calmer, as the lessons learned from the housing crisis resulted in tighter underwriter standards and better-quality mortgages. Struggling borrowers, having more equity in their homes, became more proactive by engaging with their lenders in programs to avoid foreclosure, known in the industry as “loss mitigation.” Foreclosures certainly didn’t go away, but by early 2020, the number of foreclosure postings each month had

significantly declined. Then came COVID-19. In a matter of weeks, the booming economy was forcibly stalled. Job losses were rampant, and by January 2021, almost three million borrowers in the U.S. (about 6% of mortgages) were in default and 2.3 million had entered a forbearance program with their lenders. The CARES Act,1 passed on March 27, 2020, provided for a six-month grace period—free of negative reporting and late fees—to virtually anyone who asked, followed by another six months upon request. While the CARES Act grace period technically only applied to borrowers with “federally backed mortgage loans,” private lenders offered them as well. Those forbearance periods were later extended to June 30, 2021,2 giving some borrowers the potential to avoid payment on their mortgage loans for up to twenty-one months from the start of the crisis, with the liability for the debt remaining intact. There is currently another proposal under consideration to prothehoustonlawyer.com