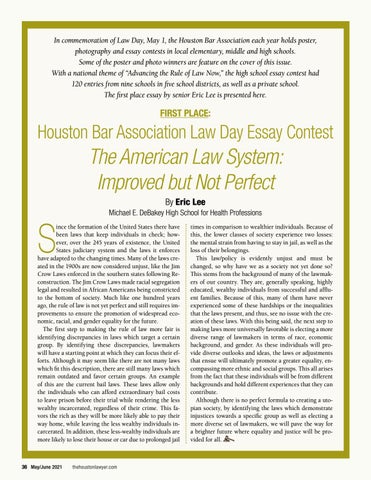 In commemoration of Law Day, May 1, the Houston Bar Association each year holds poster, photography and essay contests in local elementary, middle and high schools. Some of the poster and photo winners are feature on the cover of this issue. With a national theme of “Advancing the Rule of Law Now,” the high school essay contest had 120 entries from nine schools in five school districts, as well as a private school. The first place essay by senior Eric Lee is presented here.

The American Law System: Improved but Not Perfect By Eric Lee

ince the formation of the United States there have been laws that keep individuals in check; however, over the 245 years of existence, the United States judiciary system and the laws it enforces have adapted to the changing times. Many of the laws created in the 1900s are now considered unjust, like the Jim Crow Laws enforced in the southern states following Reconstruction. The Jim Crow Laws made racial segregation legal and resulted in African Americans being constricted to the bottom of society. Much like one hundred years ago, the rule of law is not yet perfect and still requires improvements to ensure the promotion of widespread economic, racial, and gender equality for the future. The first step to making the rule of law more fair is identifying discrepancies in laws which target a certain group. By identifying these discrepancies, lawmakers will have a starting point at which they can focus their efforts. Although it may seem like there are not many laws which fit this description, there are still many laws which remain outdated and favor certain groups. An example of this are the current bail laws. These laws allow only the individuals who can afford extraordinary bail costs to leave prison before their trial while rendering the less wealthy incarcerated, regardless of their crime. This favors the rich as they will be more likely able to pay their way home, while leaving the less wealthy individuals incarcerated. In addition, these less-wealthy individuals are more likely to lose their house or car due to prolonged jail

times in comparison to wealthier individuals. Because of this, the lower classes of society experience two losses: the mental strain from having to stay in jail, as well as the loss of their belongings. This law/policy is evidently unjust and must be changed, so why have we as a society not yet done so? This stems from the background of many of the lawmakers of our country. They are, generally speaking, highly educated, wealthy individuals from successful and affluent families. Because of this, many of them have never experienced some of these hardships or the inequalities that the laws present, and thus, see no issue with the creation of these laws. With this being said, the next step to making laws more universally favorable is electing a more diverse range of lawmakers in terms of race, economic background, and gender. As these individuals will provide diverse outlooks and ideas, the laws or adjustments that ensue will ultimately promote a greater equality, encompassing more ethnic and social groups. This all arises from the fact that these individuals will be from different backgrounds and hold different experiences that they can contribute. Although there is no perfect formula to creating a utopian society, by identifying the laws which demonstrate injustices towards a specific group as well as electing a more diverse set of lawmakers, we will pave the way for a brighter future where equality and justice will be provided for all.