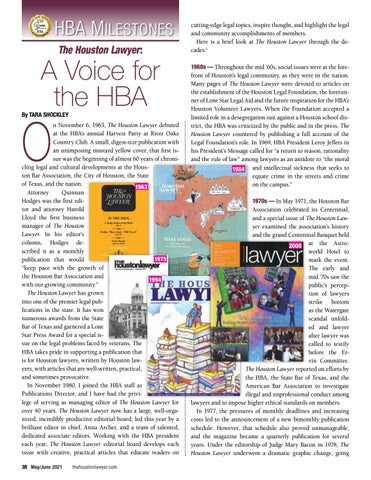 A Voice for the HBA

n November 6, 1963, The Houston Lawyer debuted at the HBA’s annual Harvest Party at River Oaks Country Club. A small, digest-size publication with an unimposing mustard yellow cover, that first issue was the beginning of almost 60 years of chronicling legal and cultural developments at the Houston Bar Association, the City of Houston, the State of Texas, and the nation. Attorney Quinnan Hodges was the first editor and attorney Harold Lloyd the first business manager of The Houston Lawyer. In his editor’s column, Hodges described it as a monthly publication that would “keep pace with the growth of the Houston Bar Association and with our growing community.” The Houston Lawyer has grown into one of the premier legal publications in the state. It has won numerous awards from the State Bar of Texas and garnered a Lone Star Press Award for a special issue on the legal problems faced by veterans. The HBA takes pride in supporting a publication that is for Houston lawyers, written by Houston lawyers, with articles that are well-written, practical, and sometimes provocative. In November 1980, I joined the HBA staff as Publications Director, and I have had the privilege of serving as managing editor of The Houston Lawyer for over 40 years. The Houston Lawyer now has a large, well-organized, incredibly productive editorial board, led this year by a brilliant editor in chief, Anna Archer, and a team of talented, dedicated associate editors. Working with the HBA president each year, The Houston Lawyer editorial board develops each issue with creative, practical articles that educate readers on 38 May/June 2021

cutting-edge legal topics, inspire thought, and highlight the legal and community accomplishments of members. Here is a brief look at The Houston Lawyer through the decades.1 1960s — Throughout the mid ‘60s, social issues were at the forefront of Houston’s legal community, as they were in the nation. Many pages of The Houston Lawyer were devoted to articles on the establishment of the Houston Legal Foundation, the forerunner of Lone Star Legal Aid and the future inspiration for the HBA’s Houston Volunteer Lawyers. When the Foundation accepted a limited role in a desegregation suit against a Houston school district, the HBA was criticized by the public and in the press. The Houston Lawyer countered by publishing a full account of the Legal Foundation’s role. In 1969, HBA President Leroy Jeffers in his President’s Message called for “a return to reason, rationality and the rule of law” among lawyers as an antidote to “the moral and intellectual sickness that seeks to equate crime in the streets and crime on the campus.” 1970s — In May 1971, the Houston Bar Association celebrated its Centennial, and a special issue of The Houston Lawyer examined the association’s history and the grand Centennial Banquet held at the Astroworld Hotel to mark the event. The early and mid ‘70s saw the public’s perception of lawyers strike bottom as the Watergate scandal unfolded and lawyer after lawyer was called to testify before the Ervin Committee. The Houston Lawyer reported on efforts by the HBA, the State Bar of Texas, and the American Bar Association to investigate illegal and unprofessional conduct among lawyers and to impose higher ethical standards on members. In 1977, the pressures of monthly deadlines and increasing costs led to the announcement of a new bimonthly publication schedule. However, that schedule also proved unmanageable, and the magazine became a quarterly publication for several years. Under the editorship of Judge Mary Bacon in 1978, The Houston Lawyer underwent a dramatic graphic change, going