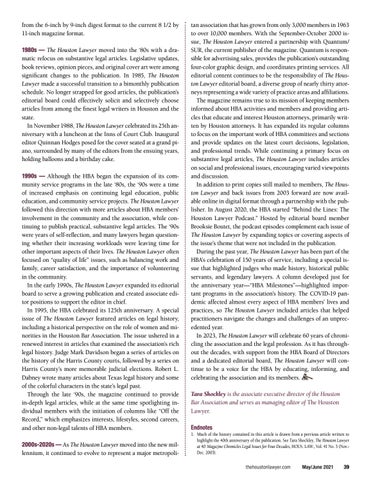 from the 6-inch by 9-inch digest format to the current 8 1/2 by 11-inch magazine format. 1980s — The Houston Lawyer moved into the ‘80s with a dramatic refocus on substantive legal articles. Legislative updates, book reviews, opinion pieces, and original cover art were among significant changes to the publication. In 1985, The Houston Lawyer made a successful transition to a bimonthly publication schedule. No longer strapped for good articles, the publication’s editorial board could effectively solicit and selectively choose articles from among the finest legal writers in Houston and the state. In November 1988, The Houston Lawyer celebrated its 25th anniversary with a luncheon at the Inns of Court Club. Inaugural editor Quinnan Hodges posed for the cover seated at a grand piano, surrounded by many of the editors from the ensuing years, holding balloons and a birthday cake. 1990s — Although the HBA began the expansion of its community service programs in the late ‘80s, the ‘90s were a time of increased emphasis on continuing legal education, public education, and community service projects. The Houston Lawyer followed this direction with more articles about HBA members’ involvement in the community and the association, while continuing to publish practical, substantive legal articles. The ‘90s were years of self-reflection, and many lawyers began questioning whether their increasing workloads were leaving time for other important aspects of their lives. The Houston Lawyer often focused on “quality of life” issues, such as balancing work and family, career satisfaction, and the importance of volunteering in the community. In the early 1990s, The Houston Lawyer expanded its editorial board to serve a growing publication and created associate editor positions to support the editor in chief. In 1995, the HBA celebrated its 125th anniversary. A special issue of The Houston Lawyer featured articles on legal history, including a historical perspective on the role of women and minorities in the Houston Bar Association. The issue ushered in a renewed interest in articles that examined the association’s rich legal history. Judge Mark Davidson began a series of articles on the history of the Harris County courts, followed by a series on Harris County’s more memorable judicial elections. Robert L. Dabney wrote many articles about Texas legal history and some of the colorful characters in the state’s legal past. Through the late ‘90s, the magazine continued to provide in-depth legal articles, while at the same time spotlighting individual members with the initiation of columns like “Off the Record,” which emphasizes interests, lifestyles, second careers, and other non-legal talents of HBA members. 2000s-2020s — As The Houston Lawyer moved into the new millennium, it continued to evolve to represent a major metropoli-

tan association that has grown from only 3,000 members in 1963 to over 10,000 members. With the September-October 2000 issue, The Houston Lawyer entered a partnership with Quantum/ SUR, the current publisher of the magazine. Quantum is responsible for advertising sales, provides the publication’s outstanding four-color graphic design, and coordinates printing services. All editorial content continues to be the responsibility of The Houston Lawyer editorial board, a diverse group of nearly thirty attorneys representing a wide variety of practice areas and affiliations. The magazine remains true to its mission of keeping members informed about HBA activities and members and providing articles that educate and interest Houston attorneys, primarily written by Houston attorneys. It has expanded its regular columns to focus on the important work of HBA committees and sections and provide updates on the latest court decisions, legislation, and professional trends. While continuing a primary focus on substantive legal articles, The Houston Lawyer includes articles on social and professional issues, encouraging varied viewpoints and discussion. In addition to print copies still mailed to members, The Houston Lawyer and back issues from 2003 forward are now available online in digital format through a partnership with the publisher. In August 2020, the HBA started “Behind the Lines: The Houston Lawyer Podcast.” Hosted by editorial board member Brooksie Boutet, the podcast episodes complement each issue of The Houston Lawyer by expanding topics or covering aspects of the issue’s theme that were not included in the publication. During the past year, The Houston Lawyer has been part of the HBA’s celebration of 150 years of service, including a special issue that highlighted judges who made history, historical public servants, and legendary lawyers. A column developed just for the anniversary year—“HBA Milestones”—highlighted important programs in the association’s history. The COVID-19 pandemic affected almost every aspect of HBA members’ lives and practices, so The Houston Lawyer included articles that helped practitioners navigate the changes and challenges of an unprecedented year. In 2023, The Houston Lawyer will celebrate 60 years of chronicling the association and the legal profession. As it has throughout the decades, with support from the HBA Board of Directors and a dedicated editorial board, The Houston Lawyer will continue to be a voice for the HBA by educating, informing, and celebrating the association and its members. Tara Shockley is the associate executive director of the Houston Bar Association and serves as managing editor of The Houston Lawyer. Endnotes

1. Much of the history contained in this article is drawn from a previous article written to highlight the 40th anniversary of the publication. See Tara Shockley, The Houston Lawyer at 40: Magazine Chronicles Legal Issues for Four Decades, HOUS. LAW., Vol. 41 No. 3 (Nov.Dec. 2003).