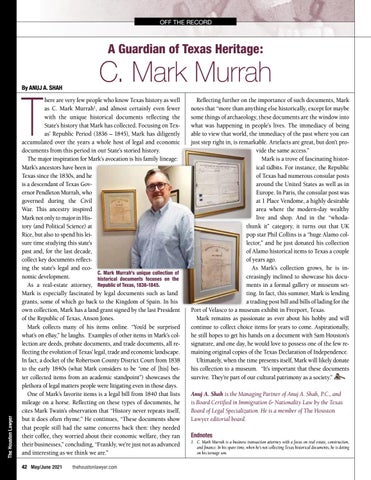 A Guardian of Texas Heritage:

By Anuj A. Shah

here are very few people who know Texas history as well as C. Mark Murrah1, and almost certainly even fewer with the unique historical documents reflecting the State’s history that Mark has collected. Focusing on Texas’ Republic Period (1836 – 1845), Mark has diligently accumulated over the years a whole host of legal and economic documents from this period in our State’s storied history. The major inspiration for Mark’s avocation is his family lineage: Mark’s ancestors have been in Texas since the 1830s, and he is a descendant of Texas Governor Pendleton Murrah, who governed during the Civil War. This ancestry inspired Mark not only to major in History (and Political Science) at Rice, but also to spend his leisure time studying this state’s past and, for the last decade, collect key documents reflecting the state’s legal and ecoC. Mark Murrah’s unique collection of nomic development. historical documents focuses on the As a real-estate attorney, Republic of Texas, 1836-1845. Mark is especially fascinated by legal documents such as land grants, some of which go back to the Kingdom of Spain. In his own collection, Mark has a land grant signed by the last President of the Republic of Texas, Anson Jones. Mark collects many of his items online. “You’d be surprised what’s on eBay,” he laughs. Examples of other items in Mark’s collection are deeds, probate documents, and trade documents, all reflecting the evolution of Texas’ legal, trade and economic landscape. In fact, a docket of the Robertson County District Court from 1838 to the early 1840s (what Mark considers to be “one of [his] better collected items from an academic standpoint”) showcases the plethora of legal matters people were litigating even in those days. One of Mark’s favorite items is a legal bill from 1840 that lists mileage on a horse. Reflecting on these types of documents, he cites Mark Twain’s observation that “History never repeats itself, but it does often rhyme.” He continues, “These documents show that people still had the same concerns back then: they needed their coffee, they worried about their economic welfare, they ran their businesses,” concluding, “Frankly, we’re just not as advanced and interesting as we think we are.”

Reflecting further on the importance of such documents, Mark notes that “more than anything else historically, except for maybe some things of archaeology, these documents are the window into what was happening in people’s lives. The immediacy of being able to view that world, the immediacy of the past where you can just step right in, is remarkable. Artefacts are great, but don’t provide the same access.” Mark is a trove of fascinating historical tidbits. For instance, the Republic of Texas had numerous consular posts around the United States as well as in Europe. In Paris, the consular post was at 1 Place Vendome, a highly desirable area where the modern-day wealthy live and shop. And in the “whodathunk it” category, it turns out that UK pop star Phil Collins is a “huge Alamo collector,” and he just donated his collection of Alamo historical items to Texas a couple of years ago. As Mark’s collection grows, he is increasingly inclined to showcase his documents in a formal gallery or museum setting. In fact, this summer, Mark is lending a trading post bill and bills of lading for the Port of Velasco to a museum exhibit in Freeport, Texas. Mark remains as passionate as ever about his hobby and will continue to collect choice items for years to come. Aspirationally, he still hopes to get his hands on a document with Sam Houston’s signature, and one day, he would love to possess one of the few remaining original copies of the Texas Declaration of Independence. Ultimately, when the time presents itself, Mark will likely donate his collection to a museum. “It’s important that these documents survive. They’re part of our cultural patrimony as a society.” Anuj A. Shah is the Managing Partner of Anuj A. Shah, P.C., and is Board Certified in Immigration &amp; Nationality Law by the Texas Board of Legal Specialization. He is a member of The Houston Lawyer editorial board. Endnotes

1. C. Mark Murrah is a business transaction attorney with a focus on real estate, construction, and finance. In his spare time, when he’s not collecting Texas historical documents, he is doting on his teenage son.