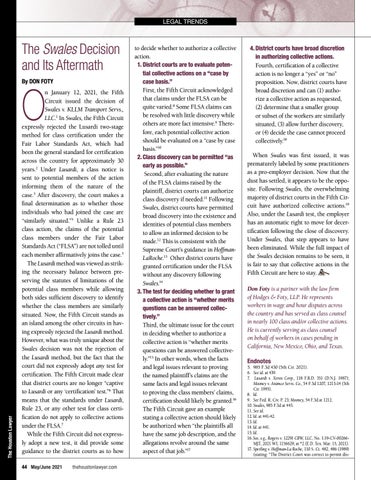 The Swales Decision and Its Aftermath

n January 12, 2021, the Fifth Circuit issued the decision of Swales v. KLLM Transport Servs., LLC.1 In Swales, the Fifth Circuit expressly rejected the Lusardi two-stage method for class certification under the Fair Labor Standards Act, which had been the general standard for certification across the country for approximately 30 years.2 Under Lusardi, a class notice is sent to potential members of the action informing them of the nature of the case.3 After discovery, the court makes a final determination as to whether those individuals who had joined the case are “similarly situated.”5 Unlike a Rule 23 class action, the claims of the potential class members under the Fair Labor Standards Act (“FLSA”) are not tolled until each member affirmatively joins the case.5 The Lusardi method was viewed as striking the necessary balance between preserving the statutes of limitations of the potential class members while allowing both sides sufficient discovery to identify whether the class members are similarly situated. Now, the Fifth Circuit stands as an island among the other circuits in having expressly rejected the Lusardi method. However, what was truly unique about the Swales decision was not the rejection of the Lusardi method, but the fact that the court did not expressly adopt any test for certification. The Fifth Circuit made clear that district courts are no longer “captive to Lusardi or any ‘certification’ test.”6 That means that the standards under Lusardi, Rule 23, or any other test for class certification do not apply to collective actions under the FLSA.7 While the Fifth Circuit did not expressly adopt a new test, it did provide some guidance to the district courts as to how 44 May/June 2021

4. District courts have broad discretion in authorizing collective actions. Fourth, certification of a collective action is no longer a “yes” or “no” proposition. Now, district courts have broad discretion and can (1) authorize a collective action as requested, (2) determine that a smaller group or subset of the workers are similarly situated, (3) allow further discovery, or (4) decide the case cannot proceed collectively.18 When Swales was first issued, it was prematurely labeled by some practitioners as a pro-employer decision. Now that the dust has settled, it appears to be the opposite. Following Swales, the overwhelming majority of district courts in the Fifth Circuit have authorized collective actions.19 Also, under the Lusardi test, the employer has an automatic right to move for decertification following the close of discovery. Under Swales, that step appears to have been eliminated. While the full impact of the Swales decision remains to be seen, it is fair to say that collective actions in the Fifth Circuit are here to stay. Don Foty is a partner with the law firm of Hodges &amp; Foty, LLP. He represents workers in wage and hour disputes across the country and has served as class counsel in nearly 100 class and/or collective actions. He is currently serving as class counsel on behalf of workers in cases pending in California, New Mexico, Ohio, and Texas. Endnotes